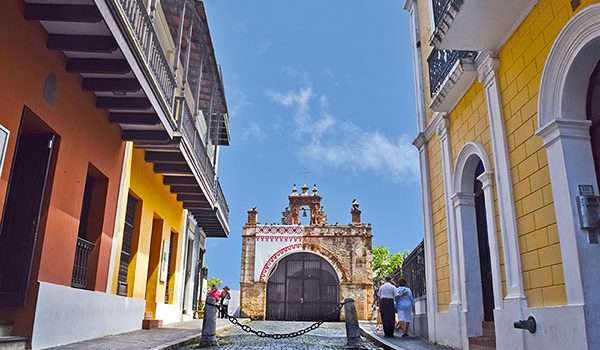 Anyone who has spent enough time in Old San Juan to be seduced by this gorgeous Spanish colonial jewel by the sea will leave still longing for “en mi Viejo San Juan,” or “in my Old San Juan,” just like that classic romantic ballad by Puerto Rican song writer Noel Estrada says.

It won’t take long to get smitten. Old San Juan is the Americas’ most stunning restored Spanish colonial sector. Perched on a headland overlooking the dramatic ocean coast and the island’s main harbor, the mile-square city has museums, galleries, and boutiques selling fine art, crafts, and other unique items from around the island, region, and world, as well as some of the city’s finest hotels, restaurants, bars and other night spots.

Its blue-tinged cobblestone streets, originally built from the ballast of New World explorer ships, descend from an ocean-side boulevard to the wide promenade lining the tranquil waters of San Juan bay. They are lined with colorful colonial homes, with balconies full of bougainvillea, and deftly designed office buildings, ancient cathedrals, and stately government buildings and city plazas. The architecture spans Spanish colonial to baroque to Gothic to Art Deco.

At a minimum, you’ll want to spend a morning or afternoon shopping and seeing the sites in Old San Juan, but if time warrants, there is enough to do to fill a full day. Make sure to have a delicious, gorgeously set lunch or dinner (or both!) at one of the Old City’s prime restaurants.

Plaza del Quinto Centenario (Quincentennial Plaza) was inaugurated in 1992 to celebrate the 500th birthday of the founding of the New World by the Spanish.

The Old City is largely defined by its twin fortresses – El Morro, or Castillo de San Felipe del Morro, and San Cristobal, or Castillo San Cristobal – that tower over, respectively, the entrance to San Juan Bay and the narrow land-bridge connecting the old city to the rest of San Juan. They combine to form the San Juan National Historic Site, which is managed by the U.S. National Park Service. There is trolley service between the two installations, but the Oceanside sidewalk makes for a great walk, especially on sunny days.

The fortresses and the massive wall surrounding the city have survived natural disasters and foreign invasions for some five centuries and still wield an enormous presence in the life of Old San Juan. They are filled with historic treasures and offer dramatic views of the tropical ocean, with historic exhibits, guided tours and informational brochures.

El Morro unfolds in a number of layers, with ramps winding from the dungeons to the troop barracks to the iconic guard towers. Its northernmost point overlooks the ocean surf crashing against the rocky coast. The great green lawn surrounding El Morro has become a favorite spot to fly kites and to picnics. Kites and refreshments are available at street carts outside the Spanish colonial fortress.

San Cristobal’s vast walls rise more than 150 feet above the ocean, and various lookouts offer ocean and city views that will only add to you appreciation of Old San Juan’s beauty. The fortress was constructed in circular fashion with the interior area linked by tunnel and moats to its outer rings dedicated to defense. Make sure to check out the killer view from the Devil’s Sentry Box, where Spanish guards were said to disappear without a trace while on watch.

You can ponder in all its glory El Morro, stretching across its vast green grounds and the emerald blue Caribbean horizon, from the nearby Plaza del Quinto Centenario (Quincentennial Plaza). It was inaugurated in 1992 to celebrate the 500th birthday of the founding of the New World by the Spanish, and features a granite and clay totem-like monument and adjacent fountains and sculptures celebrating Puerto Rico’s rich cultural heritage. Beyond the plaza is the Cuartel de Ballaja, a 19th century army barracks that is one of the largest buildings constructed by the Spanish in the Americas. Today it house the Museum of the Americas, focused on indigenous and regional art, a pleasant outdoor cafe and a handsome courtyard that is often host to special events. The Asilo de Beneficencia, a former indigents’ hospital dating from 1832, is also nearby and the Institute of Puerto Rican Culture. Also nearby is Casa Blanca, a charming home that once belonged to Puerto Rico’s first governor, Juan Ponce de Leon, with an interesting museum and gorgeous gardens.

The Old City is host to the Caribbean’s hottest street party, the Fiesta de la Calle San Sebastian in mid-January, but you can catch its spirit on a visit to the street that bears its name on any of San Juan’s sultry nights. San Sebastian is a cobble-stoned street lined with bars and restaurants, and art galleries and workshops are just around its many corners. Laughter and the salsa, bomba and plena music associated with the festival pour out of the bars, with their large wooden doors thrown open to the street. The party has been raging here for more than a century.

This is also the birthplace of “Despacito,” the Luis Fonsi mega-hit featuring Daddy Yankee that has become the most streamed video of all time. The colorful seaside barrio that former Miss Universe 2006 Zuleyka Rivera saunters through in the video is La Perla, which is sandwiched on the Old San Juan coast between the two historic churches. The joyous dance scene at the end takes places at La Factoria, which has been named one of the world’s best bars, on Calle San Sebastian.

Some of the finest churches in the New World are in the vicinity of Calle San Sebastian and Calle Cristo, including the recently restored San Jose Church, a Gothic rarity and the celestial Catedral de San Juan, a vaulted beauty that is home to the impressive works of religious arts and rare artifacts, as well as the tomb of the island’s first governor, Juan Ponce de Leon, and the mummy of Roman martyr Saint Pio. The Plaza de las Monjas, or Nuns’ Plaza, might be the most deliciously shady spot in all of Puerto Rico, with a bay breeze funneling through tow of the old city’s most gorgeous tree-lined streets, with some of the most gorgeous colonial homes.

If you don’t stay at Hotel El Convento, you’ll want to come by for a tour anyway, if not a meal or a drink at the gorgeous restaurants located in its interior patio and street-level terrace restaurant. It was born in 1651 as a Carmelite convent, and has gone through many lives since then, but today remains a part of the beating heart of the Old San Juan. Its tiled courtyards and terraces are outfitted with gorgeous Spanish furnishings, palm trees, and Caribbean flowering plants, under high-beamed ceilings that are iconic of Old San Juan. It’s really one of the perfect spots to soak up the unique Old San Juan vibe.

In fact the Old City, as it is affectionately known by locals, has wonderful lodging options, including full-scale resort hotels like the Sheraton Old San Juan across from the cruise ship piers. There are also small guest houses and inns with big charm, like Casa Sol Bed and Breakfast, on a beautiful stretch of Calle Sol.
The Plazuela de la Rogativa is a gorgeous shady square overlooking the bay and Puerto Rico’s impressive governor’s mansion, La Fortaleza. Its biggest charm however is a statute of a bishop and three women that recreates a religious procession in 1797 that legend has halted a British attack on San Juan, when sailors mistook the candles of marching nuns for the movement of Spanish reinforcement troops. La Fortaleza, the seat of local government for more than 300 years, is just down the block. The stunner incorporates neoclassical and Arabian elements and has a choice location overlooking San Juan Bay, with great views and breezes in most of the building, and from its many gardens and patios. Tours are available weekdays.

You’ll pass San Juan Gate, which was the main entrance to the city when it was built in 1635, and today leads to the charming stretch of the San Juan bay, with small fishing boats docked just off shore. To the right is a walking path that hugs the base of the massive headland on which El Morro is built and the fortresses ancient walls. The saltwater and sun sprayed path passes dramatic seascapes and patches of sea grapes and tropical vegetation. The mood turns romantic when the El Morro is lit up at night. To the left is Paseo de la Princesa, a bayside promenade between the bay and the massive wall of the ancient city. You’ll see the alluring “Raices” or “Roots,” monument and fountain, which is an impassioned tribute to the Taino, African, and Spanish roots of Puerto Rico and its people, complete with gorgeous gods and goddesses in all their naked glory riding huge sea and land creatures. The beautifully restored La Princesa housing the Puerto Rico Tourism Company Headquarters is also on the promenade, which hosts artisans and sidewalk cafes.

Bahia Urbana, a bayside park on the outskirts of the old city that hosts concerts and special events, as well as ship tours and other tourist adventures.

Cristo and La Fortaleza streets have some of the old city’s smartest boutiques and galleries, but you’ll also want to look to Calle San Francisco, as well as San Jose. There are great cafes, bars, and restaurants throughout the historic sector, but Recinto Sur has become its restaurant row, where you can find classic comida criolla in authentic settings, Spanish food with live flamenco show, inventive contemporary cuisine to live U.S. and Latin Jazz shows and so much more.

Of course one of the joys of the Old City is stumbling around its side streets and cooling off in its gorgeous plazas, which offer shady benches and refreshment stands. Plaza de Colon, at the main entrance to Old San Juan, is centered on a monument of Columbus, but different levels of terraces and fountains and shady corners. Plaza de Las Armas, located at Old San Juan’s heart, is home to the stately San Juan City Hall and Puerto Rico State Department, as well as a number of restaurants and boutiques. The fountain was built to represent the four seasons, and the statue of the gentleman sitting on the bench is Titi Curet, and Old City fixture during his life who was perhaps Puerto Rico’s most prolific writer of salsa music. There are also a number of plazas near the cruise ship ports along the bay.

Artisans often hawk their wares in the plazas and promenades while musicians perform in these public spaces as well. In fact, the city of San Juan has a continuing live music program throughout Old San Juan and the rest of the city that take place on certain nights and weekends throughout the year. The newest addition to the ports area is Bahia Urbana, a bayside park on the outskirts of the old city that hosts concerts and special events, as well as ship tours and other tourist adventures.

Old San Juan is only one-square mile, but it can take days to explore its many charms. When it comes time to say goodbye, you’ll already be plotting a return to, as the Estrada song says, “search for my love, and dream again, in my Old San Juan.”